In computing terms, Compression is representing a value with fewer bits than it normally is. Take the string "hello" for example, How is "hello" represented or stored in memory?

Firstly, we know the computer just knows 1's and 0's. With ASCII codes, every alphabet has a numeric representation, and then the number can be represented with at least 8 bits 1. In Golang for example, to see the ASCII codes of the string "hello" as:

Generally, compressing very small values doesn't change much. This is why compression is mainly used for media that needs alot of bytes to be represented properly on the computer eg. videos, and raw audio files.

Compression aims to reduce the number of bytes sent over the wire, this increases speed and saves bandwidth.

In the diagram above, the original representation of "hello" is 4 bytes, but after compression, only 2 bytes are sent over the wire.

Huffman Coding is a lossless compression algorithm with an elegant way of representing data. It simply works by ensuring the character with the highest frequency is represented with the smallest bits. This means for a string "how is henry having a hitch ?", the character "h" is the most frequent (excluding the empty spaces), and if it is represented with 2 bits instead of the usual 8 bits, then we have saved 6 bits for every occurrence of "h" in the string. This compresses the string significantly. Characters like "y" that appear sparingly will not be compressed as well as "h", or won't be compressed at all.

Huffman codes are prefix codes, this characteristic is of significant importance because it means that we can't have collisions, and there's no need for any extra synchronization when decoding or decompressing.

Using this text "how is henry having a hitch ?" as an example, the first thing to do will be to get the frequency of every single character in this string, and then sort it 2 in ascending order and by frequency.

This is then heapified and represented in a priority queue, where the characters with the least frequency are at the top. At this point, every character is represented as a node. The character "h" should be a node with a value of "h" and a priority of 6:

The leaf nodes are the only nodes with values in them and are represented with rectangles in the diagram, and the other nodes are internal nodes. These nodes just have a priority, no value. This process of popping, merging, and pushing back to the queue is repeated till the queue is empty. 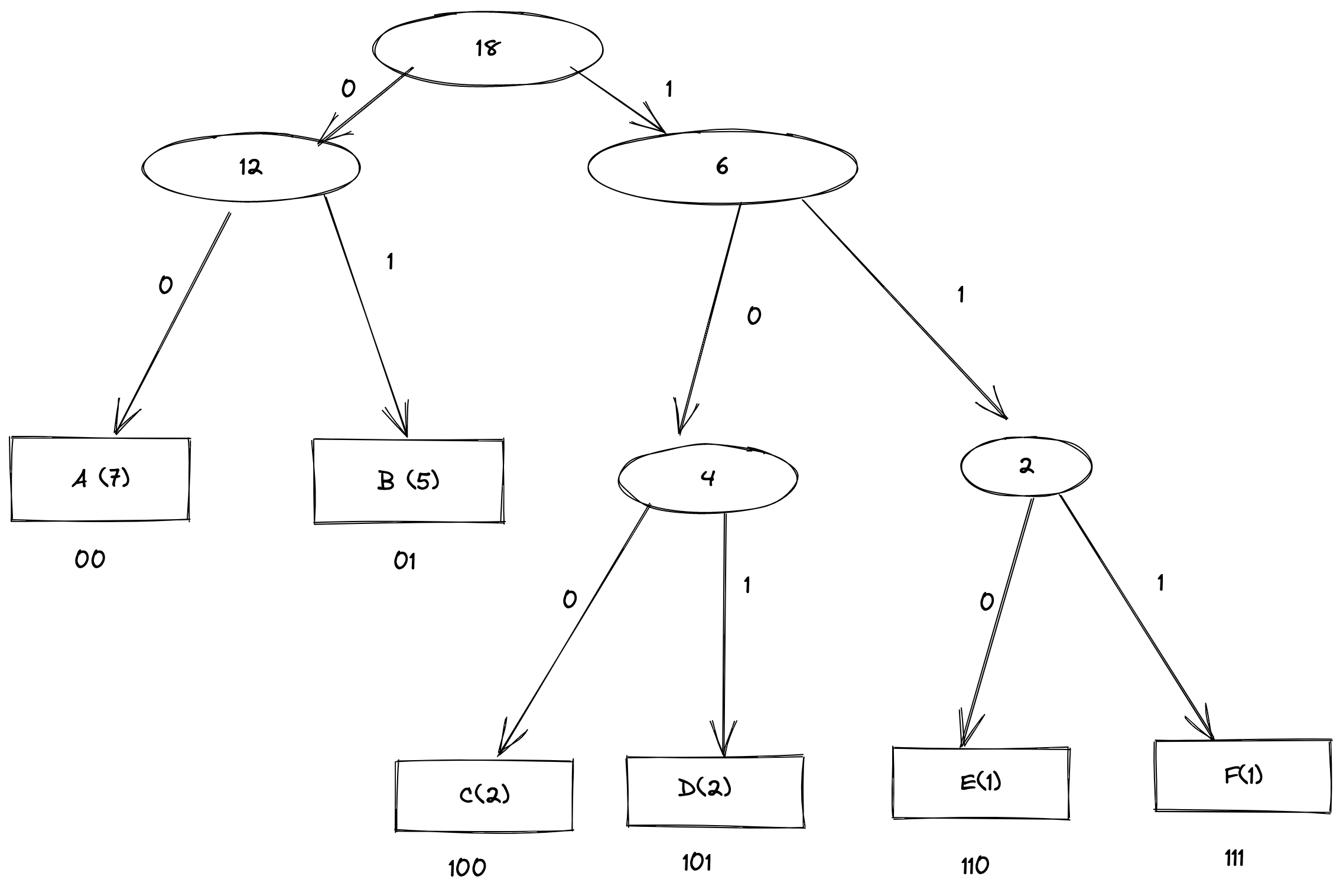 From the example above, you can see that "A" is represented as "00" because it's left of its two parent nodes. Characters "A" and "D" are represented by only 2 bits each because they have higher frequencies of 7 and 5 respectively and "C", "D", "E" and "F" have more bits (3) because of lower frequencies.

The compressed bytes and the Huffman tree will be sent over the wire to the decoder, and the decoder will just recurse through the bits and when it hits a leaf node, it records the value, goes back to the root node, and walks a different path.

This proof of concept exists on Github, and I've run it for very large text files and on average, I achieve around 40% compression.

The time complexity for this is O(nlogn), where n is every distinct character in the string, and logn because a priority queue or min-heap is used to pop and push characters based on frequency. Multiple queues can be used to build the Huffman tree in O(n) time complexity.

Huffman coding is not without its flaws, it's most optimal for input with a known probability distribution, if this isn't known, other algorithms like arithmetic coding can be used.

1. It's at least 8 bits because floating point numbers need more bits, negative numbers, signed numbers, and greater number types eg. `int32` and `int64`
2. Ideally, when the characters have the same frequency, they're further sorted in ascending order by their ASCII codes.